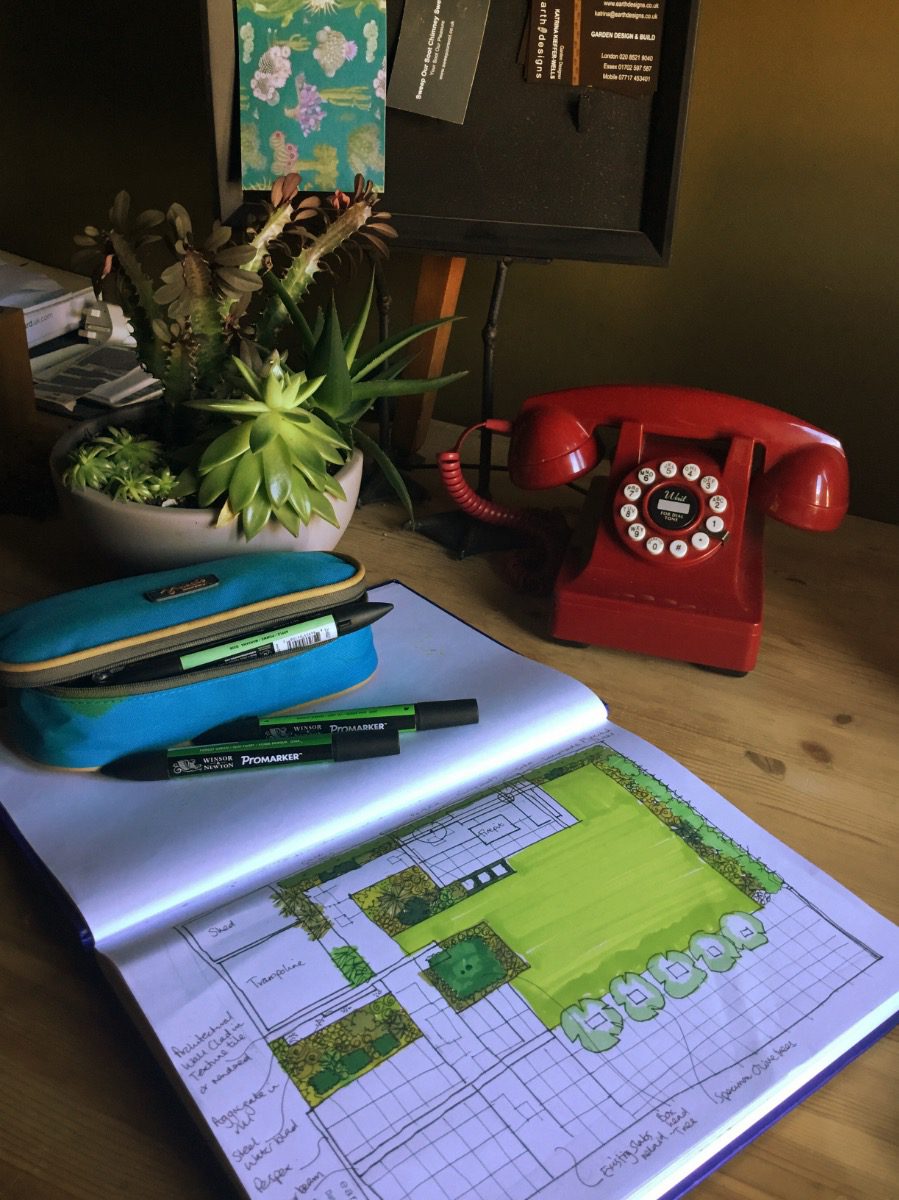 This client had made extensive renovations to the interior of their house, and had made some landscaping improvements several years ago. They were now bored with the look and wanted to inject some modern pizzazz to create garden suntrap in Leigh-on-Sea.

The existing paving slabs were in good condition, but the patio wasn’t big enough. Senior designer Katrina suggested relaying the slabs to form an L-shaped path down the garden and across the back to a second, new patio area. This would be laid adjacent to the house in porcelain slabs, ideally in a contrasting colour to the first patio, creating visual excitement.

Katrina was keen to make sure that the view of the garden was appealing from every window. In front of the lounge window, she suggested a shallow patio with specimen olive trees. Directly off the main exit from the patio, large box-shaped pleached trees would sit in front of a large architectural wall, with an opening for the user to pass through.

The architectural wall would serve as a backdrop to the first space and perform two functions. The first is to enclose the area near the house, making it more private and creating a room in the garden. From this, a water feature could be positioned creating another dimension to the space. The second function of the wall was to screen the trampoline from view. In the back left-hand corner of the garden, the trampoline and shed were tucked away yet still easily accessed via the path.

A garden suntrap in Leigh-on-Sea

In late evening, the back of the garden was bathed in sun. Here there would be a soft seating arrangement, perhaps with swing seat, as well as a fire pit for afternoon and late evening relaxation. A pergola of timber crossbeams with a modern garden lampshade would make the space nice and cosy.

Planting in the space

Planting was to be kept to a very simple pallet of green and white. Pleached trees were proposed for the rear boundary to increase the fence height and make the garden more private, away from the eyes of neighbours. Architectural plants in a variety of shades and colours would give the garden a tidy, modern feel. Lawn would fill the centre of the space allowing for family use.

Book your free garden design consultation now by contacting Katrina and Matt on 01702 597587 or email us at info@earthdesigns.co.uk.