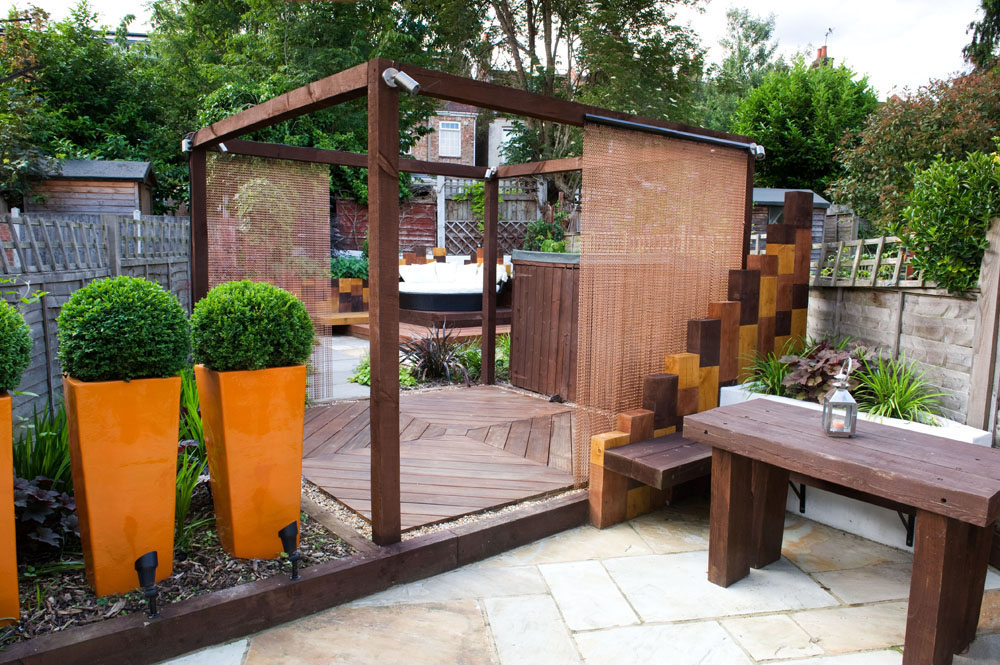 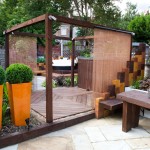 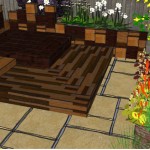 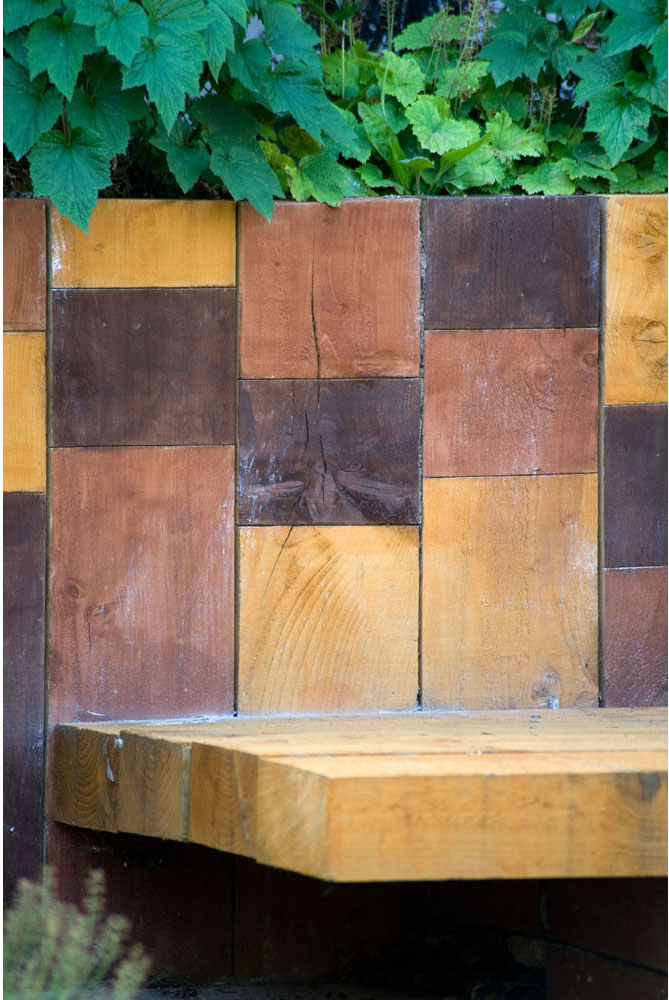 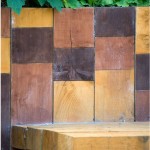 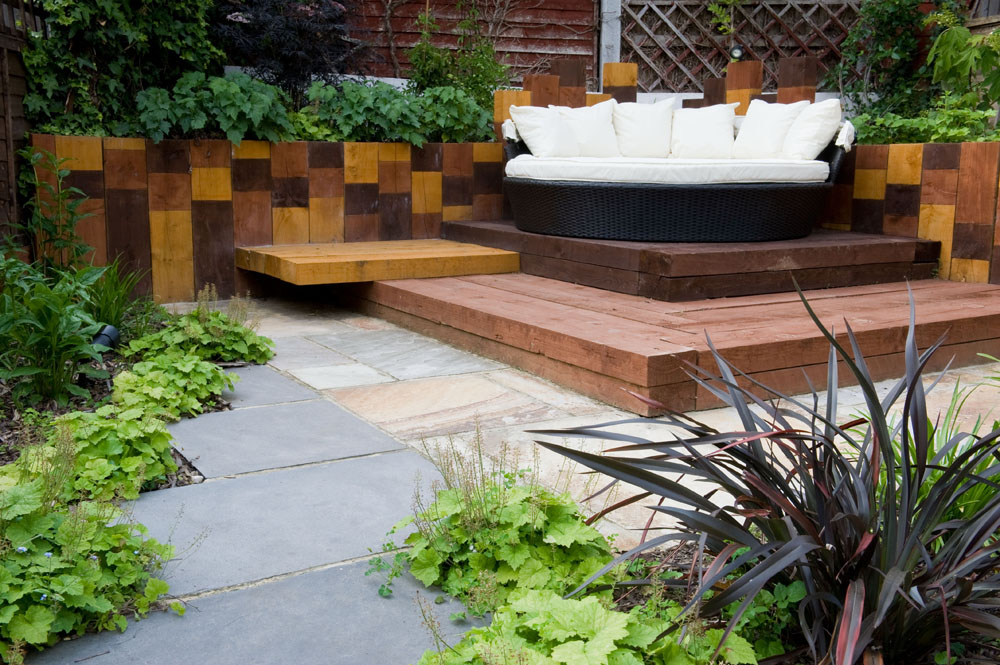 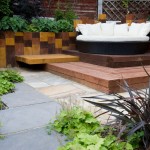 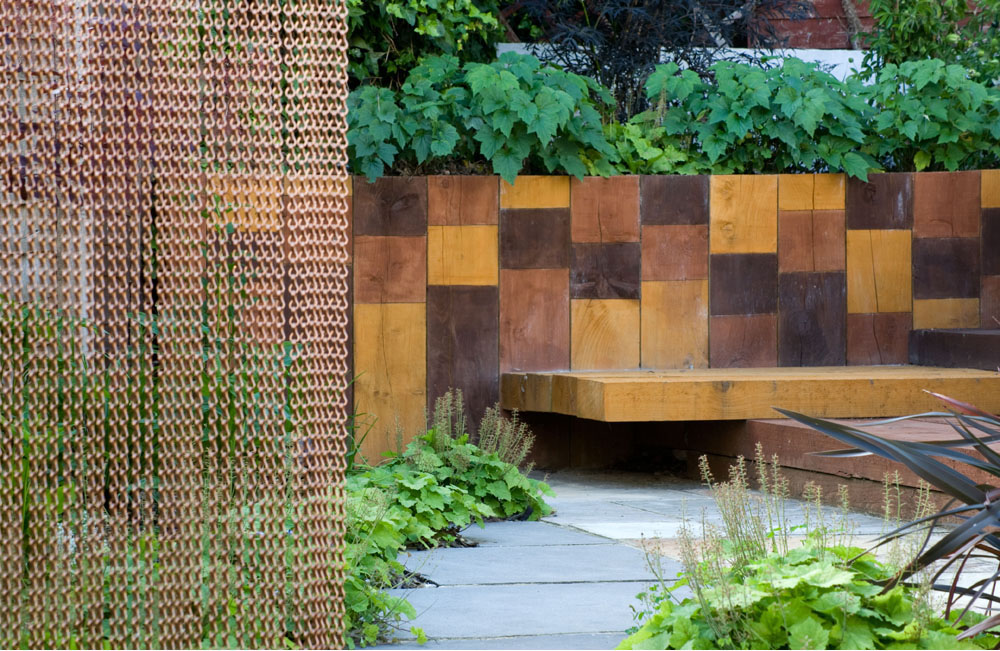 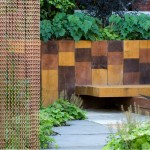 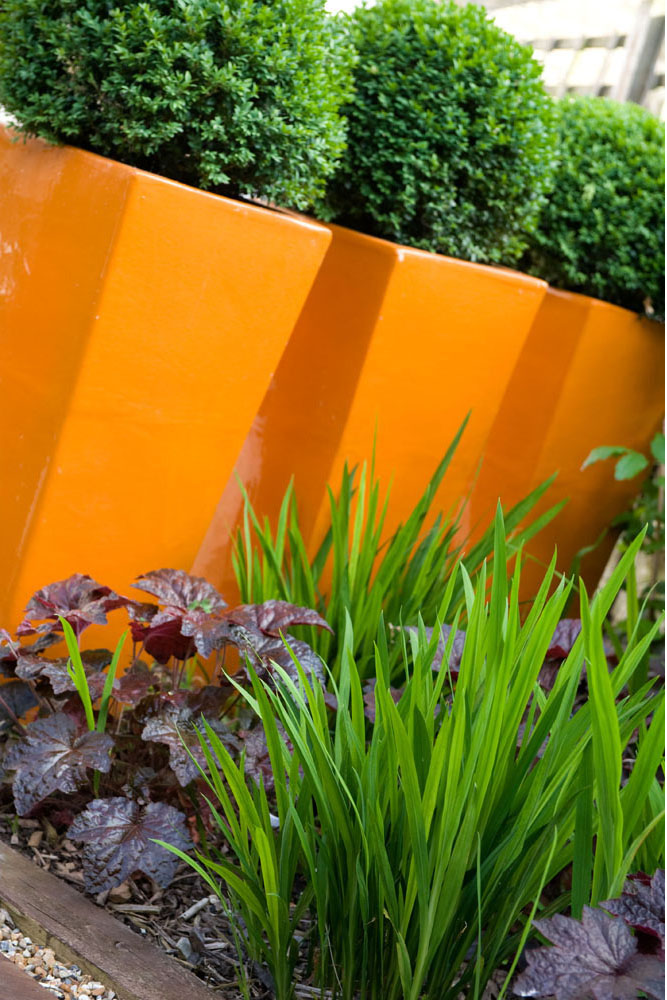 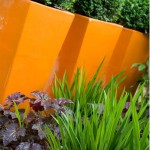 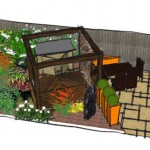 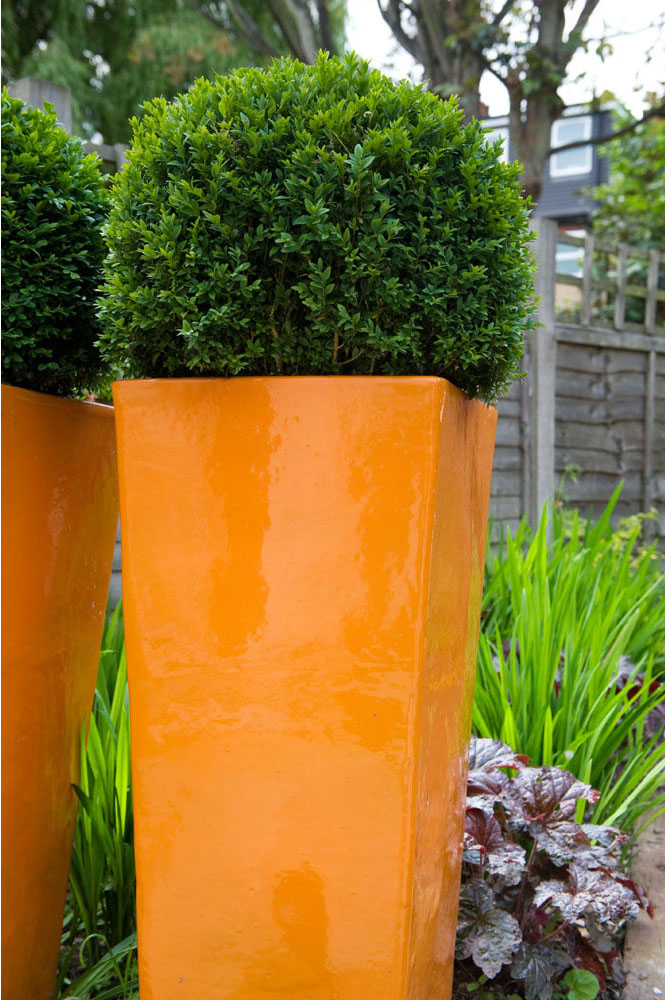 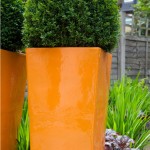 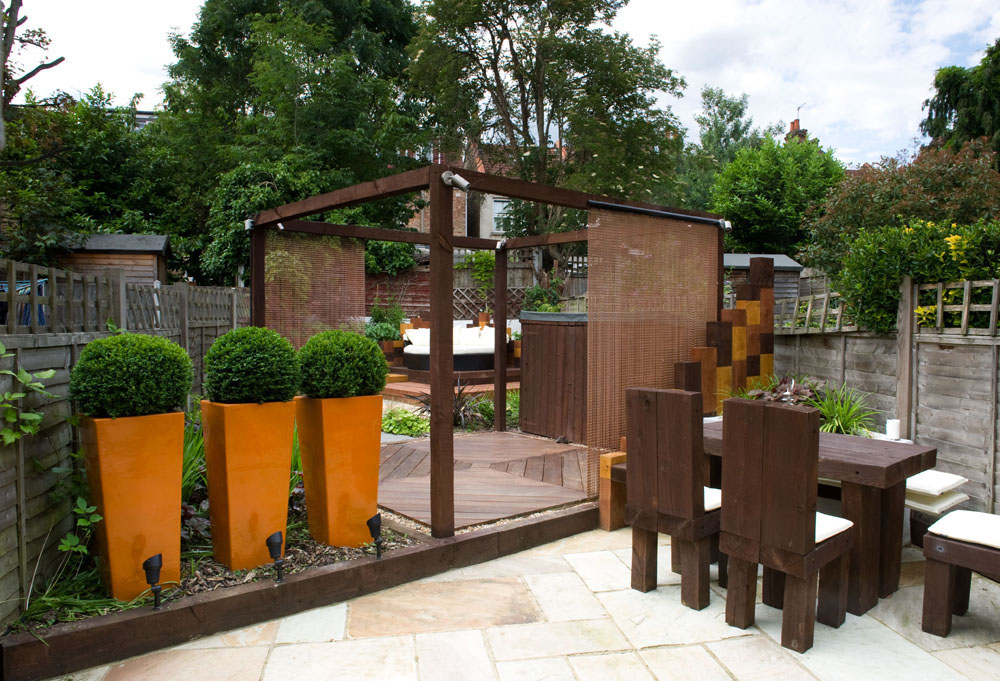 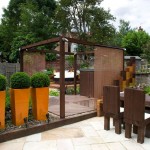 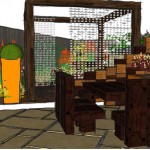 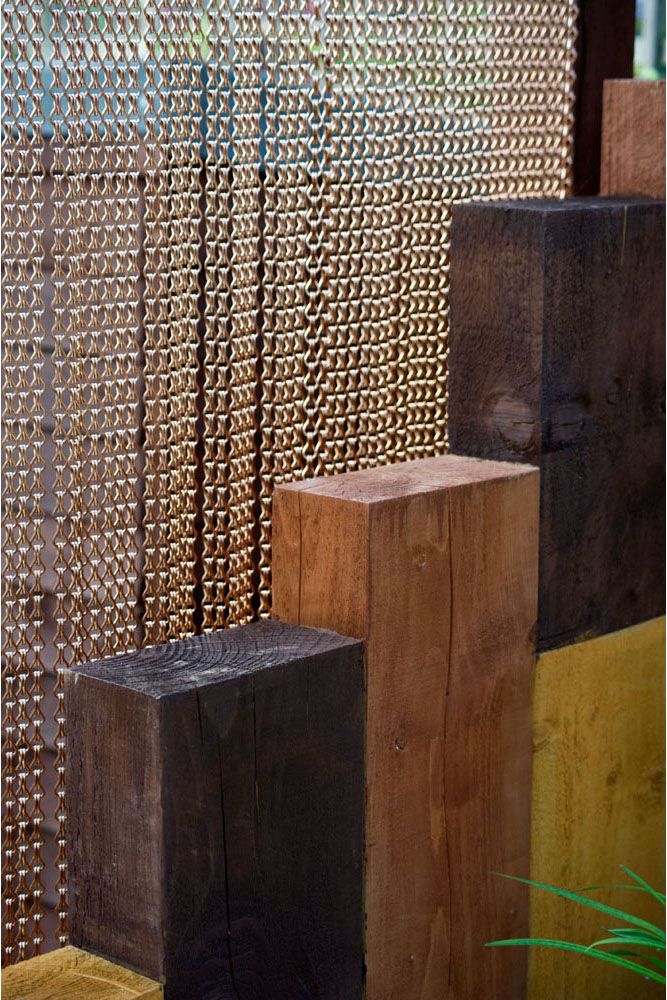 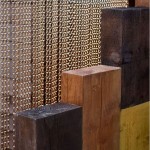 Brief
The client had lived in the house for a number of years and had refurbished the interior to a high standard. The garden had little to offer in terms of interest, containing just a ramshackle shed and some overgrown grass. The existing hard surface was compromising the damp proof coursing, so needed to be removed in order that the new finished height was compliant with building regulations. The client likes natural materials, with orange as an accent colour.

Description
“The garden was split into three distinct areas with separate purposes in mind. The first section, adjoining the house, featured a patio laid with mint fossil sandstone in a random pattern. To the right hand side of the patio is a seating/dining area featuring a railway sleeper table and chairs, plus a railway sleeper bench backed by an orange painted wedge-shaped rendered raised bed. This seating area was framed by a feature wall constructed from upright railway sleepers stained variously with three different block colours. Large black slate slabs lead down the sideway to the door at the end.

A single railway sleeper step, running diagonally across the space, leads to the central section of the garden. This section is constructed on a diagonal to the garden side boundaries and features a timber pergola adorned with coloured aluminium chain curtains to create an enclosed, semi-private space. A trio of tall tapered planers containing architectural box balls were placed along the edge of the railway sleeper step, to the left of the pergola, to further screen the rest of the garden from the area adjoining the house. Flooring beneath the pergola features Angelim hardwood decking constructed in a diamond pattern. This area also benefits from a bike store installed in a planting bed to the right of the pergola.

A black slate path in staggered zig-zag shape leads from the pergola down the garden to an area of Indian sandstone at the rear of the space. This sandstone paving borders a series of railway sleeper platforms of various heights, backed by a second vertical railway sleeper wall constructed to retain the existing raised planting section at the very back of the garden.

The planting scheme follows a black and white theme, including sambucas, phormiums and heuchera, with the occasional orange flora as an accent.

Testimonial
“I am not a natural gardener or stylist, but I like things to look nice. When I first opened the door to Kat, I was struck by her warm, friendly approach and amazed with the sketch she came up with in response to my vague theme of “inside – outside”. The drawings that followed, setting out both the structures and planting schemes, were equally exciting. The garden was completely transformed over a couple of months of hard work from Matt and his team. One year on, I am delighted with my relaxing inside-outside garden, which truly is an extension of my house. It’s one of the best investments I have made.”